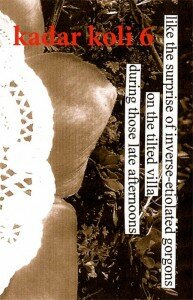 I’m excited to announce the release of Kadar Koli 6 which has just been published by the indomitable David Hadbawnik under the imprint of his Habenicht Press! I’ve been following Kadar Koli since its first issue, and it has been and remains — hands down — one of my favorite journals. This latest installment is no exception: it satisfies in the way I’ve come to expect it to satisfy.

David Hadbawnik is the author of Ovid in Exile (Interbirth Books, 2007) and a regular contributor to SOUS LES PAVÉS. You can learn more about David and stay abreast of his work by visiting Primitive Information.