By
sayitwithstones
– January 11, 2012Posted in: SAY IT WITH STONES 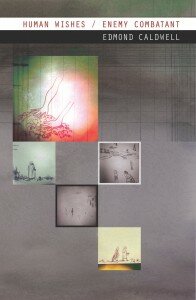 “He” is the nameless hero of Human Wishes / Enemy Combatant, and he’s probably no more than a pronoun. With a looping itinerary that takes us from St. Petersburg, Russie to Salem, Massachusetts, from the Palestinian Nakba to a plot to replace New Yorker critic James Wood with a shadowy look-alike, Human Wishes / Enemy Combatant might just be the novel that explodes mainstream, corporate “literary fiction” from the inside out.

“These ‘anti-stories about In Between places’ bristle with vibrant, fact-filled paranoia and good, old-fashioned self-deprecation, making constant, unexpected turns at breakneck pace. From St. Petersburg to Palestine, from coffin-shaped Joseph Cornell boxes to Monty Python doing Beckett, from reflections on the onslaught of Taylorism to violent, youthful misreadings of Animal Farm, the pure writerly intensity of the material, and the audacious panache of each new sentence, never for a moment flag.”
–Jacob Wren, Revenge Fantasies of the Politically Dispossessed

Edmond Caldwell got a literature PhD from Tufts University in 2002 and then decided he would prefer not to. Since then his fiction has appeared in West Wind Review, Mad Hatters’ Review, Harp & Altar, Acappella Zoo, Pear Noir!, Lamination Colony, Prick of the Spindle, DIAGRAM, Juked, and elsewhere. He has been twice nominated for a Pushcart Prize, and his short play, The Liquidation of the Cohn Estate, was produced in the 2009 Boston Theater Marathon. Human Wishes / Enemy Combatant (Say It With Stones, 2012) is his first published novel. He lives in Newton, Massachusetts.